Out Of The Box

Converting to organics has given Gary and Angela Spotswood a renewed passion for farming, writes Kylie McGregor.

Life has come full circle for third-generation farmer Gary Spotswood. His grandfather bought 364 hectares of scrub and wetlands in Inkerman, North Queensland, in 1927, part of which was cleared to run cattle and free-range pigs, all without the use of chemical inputs.

In the almost 90 years since then the property has expanded by another 66 hectares and Gary’s father introduced sugar cane in 1967. Like many conventional livestock and sugarcane farms, the use of synthetic fertilisers and chemicals was also initiated as part of its agricultural practices. Until recently.

In 2011 when Gary and his wife, Angela, took over the reins full-time, they decided to convert the farm – now named Mt Alma Fresh Organics – to organics and were fully certified last year. They continue to run cattle and grow sugar cane, but also now have an established market garden that includes a range of fresh organically grown vegies and herbs as well as a mango orchard.

“In a way, we’re back to farming how my grandfather used to – without synthetic chemical inputs,” Gary says. And since we have gone organic I feel more passionate about farming again. I’m excited about the changes and what’s to come.

“We now concentrate more on soil health and building up the organic matter. This allows for more water to be stored in the soil, reduces run-off and helps to grow healthier plants. We also have less pests and diseases than we used to.”

Other benefits the Spotswoods have noticed in the five years since the farm’s transition include a change in the flavour and density of their organic crops compared with conventionally grown produce.

“Now we can taste the difference,” Angela says. “Our organic lettuces taste amazing – they actually taste like lettuce. To me, conventionally grown lettuce from the supermarket just tastes like water in comparison.

“We have also found that our organic produce tends to be more dense. While it doesn’t grow as fast as conventionally grown, it tends to weigh more.”

At Mt Alma Fresh Organics, the mango orchard and market garden are certified by Australian Certified Organic (ACO) while the sugar cane and cattle are certified by the US Department of Agriculture (USDA) (this provides a wider export market). Certification takes three years in which everything has to be grown organically, with only allowable natural inputs.

“The first year is called pre-cert, then for the next two years the farm is classified as ‘in conversion’,” Angela says. “This means you are limited to where you can sell your produce.”

Gary and Angela say the hardest step in the process was filling out and sending the applications. Their advice? “Just do it!” Gary says. “The paperwork can be daunting. We sat on it for ages, even though we were already using organic practices. That was really the hardest step. After that we were on our way!”

Story By: Kylie McGregor from Out of the Box published on September 22, 2016. 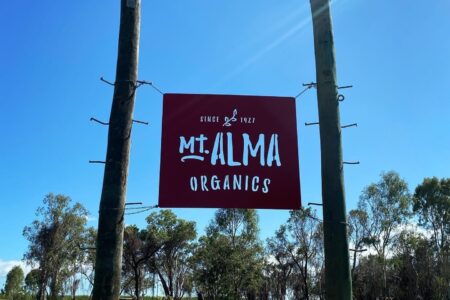 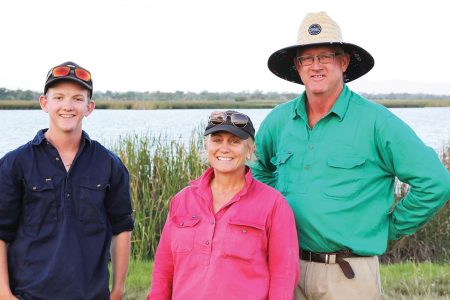 Freshen Up Your Inbox

Sign up to our newsletter to stay up to date with what seasonal fruit and vegetables will be coming out in advance. We’ll even send you some tasty recipe’s to spice up your meal planning.

We promise not to spam!

Interested in stocking Mt. Alma produce? Give us a call!